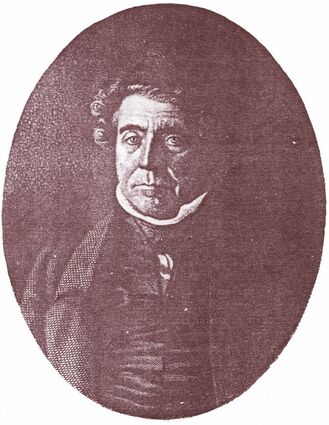 From the January 19, 2012 edition of McKenzie River Reflections

On January 18th two hundred years ago Donald MacKenzie finally reached the Pacific Ocean. At 27 years old and 6' 6" in height, he was already well-regarded as the assistant leader of the 60-person "Astorian Overland Party". The McKenzie River was later named after this young leader. This is the final Chapter of Travels with Mackenzie.

In late November 1811, the Overland Expedition found themselves in the rugged and inhospitable Snake River canyons. The expedition split into four groups, each hoping to find a route to the Pacific Ocean and everyone desperately needing to find food along the way. Ten men followed Donald Mackenzie across the rugged plateau adjacent to the Snake River. In the southeastern portion of present-day Washington State, they came upon a large river flowing west and soon met a group of friendly Indians who agreed to sell several horses. When the river they were following emptied into an even larger stream, the Overlanders realized that they had finally reached the Columbia (at present-day Tri-Cities). From their knowledge of Lewis and Clark's route, they deduced that they had been riding along the watercourse then known as Lewis's River, and known today as the Snake River. Over the next several weeks, with help of the native people living along the river, they made their way down the Columbia River finally reaching Fort Astoria on January 18th, 1812.

The Partner in charge of Fort Astoria at that time was Duncan McDougal. McDougal and several dozen employees of the Pacific Fur Company had arrived at the mouth of the Columbia from New York aboard the ship Tonquin on March 22, 1911. McDougal recorded Donald Mackenzie's arrival in his journal. "Around 5 p.m. on January 18, 1812, workers at Fort Astoria were agreeably surprised by the arrival of Messrs. Donald MacKenzie, Robert McLellan & John Reed with 8 hands in two canoes." That day clerk Gabriel Franchere noted that the men were "safe and sound but in a pathetic state, with their clothes in rags". Clerk Russ Cox remarked that "their concave cheeks, protuberant bones, and tattered garments strongly indicated the dreadful extent of their privations; but their health appeared uninjured, and their gastronomic powers unimpaired". They had traveled 1750 miles through a largely unmapped country. A month later the remainder of the Overland Expedition, led by W.P. Hunt, arrived safely at Fort Astoria.

Around April 1, 1812, Donald Mackenzie left Fort Astoria for six weeks to trap and hunt with six to eight men. They ventured farther south than the Willamette Falls, where Halsey and Seaton had gone in 1811. Mackenzie's party encountered and traded with numerous native people living throughout the valley probably traveling on the well-worn trails made by the thousands of people who had lived in the valley for generations. When the wagon-train settlers arrived in the 1840s the valley was much more sparsely populated. Over eighty percent of the native people had died as a result of a malaria epidemic in the early 1830s.

The lack of resupply ships and the War of 1812 between Great Britain and the newly formed United States of America compelled Mackenzie and his business partners to sell Fort Astoria to the British. Mackenzie returned overland to New York, taking the Bill of Sale for Fort Astoria to the company's American financier, J.J. Astor. In 1816 Mackenzie returned west to establish Fort Nez Perce near the mouth of the Snake and Columbia Rivers. This became an important inland trading post for the North West Company of Canada. In 1822 he was asked by Hudson's Bay Company to govern the politically controversial Red River Colony near present-day Winnipeg. His ability to negotiate difficult multi-cultural and environmental conditions saved many lives in the Colony particularly after the Red River flood inundated essential farmland in 1826. In 1824 Hudson's Bay Company made the first map showing the "Mackenzie's Branch" as a tributary to the Willamette. Donald Mackenzie did not leave a written account of his travels but the journals of people who depended on him for their daily survival portrayed him as a capable, honest leader, able to adapt to the immense physical and social challenges of the time. As the first European to the southern Willamette Valley two hundred years ago his legacy is considerable