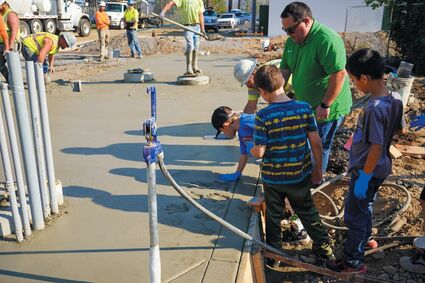 Handprints and other individual markings are now part of the visual history of the McKenzie River Community School campus.

FINN ROCK: After over two years, and with the help of state and federal grants, the stadium grandstands lost to the Holiday Farm Fire at McKenzie High School are being rebuilt.

Last week, the district focused on "making a mark" by allowing students and staff to put a handprint or initials on the wet concrete slab under the new bleachers. Like the structures built by the Civilian Conservation Corps in the 1930s, the slab will likely be something students can visit with their own offspring in the years to come. 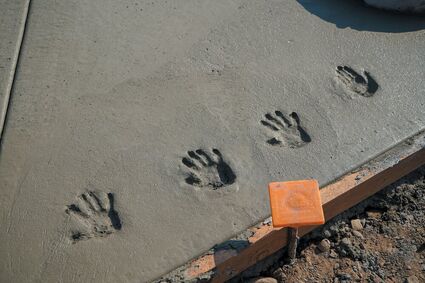 Lasting handprints, initials, and other markings are now part of the history of McKenzie Schools.

For Anna Riedmann, a McKenzie High Senior and Associated Student Body President, the reward should come much quicker. "You don't realize how impactful that is until it's gone," Riedmann said. Although she's admittedly not "a football person," she says she had always enjoyed going to the games and "hanging out with friends and seeing people I knew on the field."

The new structure will again be topped with a press box and painted to resemble the way it used to look. Another lasting feature will be a manzanita branch sculpture created by students of the Phoenix-Talent School District and delivered to the school last April. The work was created when the P-T students realized they weren't alone in being impacted by the wildfires of 2020.

After dropping off their artwork at McKenzie the Phoenix-Talent students took a similar gift to the Santiam Canyon School District, which had also been hit by fire.