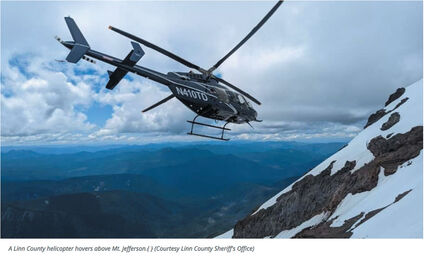 MT. JEFFERSON: The family of a pilot killed in an accident in the Mount Jefferson Wilderness got some help from a GoFundMe campaign, according to Linn County Sheriff Michelle Duncan. The sheriff reported on October 20th that her office had continued to assist in the recovery of a plane that was lost near Mount Jefferson.

At 4:14 p.m., on September 22nd, two hikers who had been on the Pacific Crest Trail reported they heard the crash and said they could smell fuel but did not see an airplane.

The Linn County Search and Rescue team, along with Life Flight, was activated to search for the downed airplane. Life Flight flew to the area but was not able to identify a crash site due to weather conditions. The United States Coast Guard also responded but was also unable to locate a downed airplane.

Like the recovery, locating the downed plane was challenging. It wasn’t until the following morning that a Guard helicopter flying search patterns located the crash site east of Marion Lake - between Mount Jefferson and Three-Fingered Jack.

Linn County Search and Rescue teams hiked into the area and confirmed the pilot was deceased as the impact of the crash was not survivable.

Recovery of the Piper Cherokee presented significant challenges, Duncan said, and the US Forest Service – Willamette National Forest - and the National Transportation Safety Board worked with the family of deceased pilot, Wayne Wirt, of Chehalis, Washington to recover the aircraft.

Officials said the Wirt family was tasked with raising a significant amount of money to recover the aircraft. It was estimated it would cost from $25,000 to $50,000 to remove the remains that were located at about 6,500 feet in a federal wilderness area that was miles away from any road.

Fortunately, the call for help from Wirt’s wife and three children was heard by Dave Sparks, known as “Heavy D,” and Dave Kiley, known as “Diesel Dave,” who starred in the reality show “Diesel Brothers” and appear on the HeavyDSparks YouTube Channel.

The men say they felt compelled to help a family in need and assisted the family by coordinating recovery efforts.

With the support of the family, the Linn County Sheriff’s Office, worked with the US Forest Service and Sparks to recover the aircraft.

Duncan said the Linn County Sheriff’s Office was there “to recover any remains of Wayne Wirt and ensure the value of human life was at the forefront.”

Two private helicopters from Washington-based Northwind Helicopters were used to drop off multiple personnel on the mountain and lift the wreckage out of the area. The damaged aircraft was taken to Washington state where the National Transportation Safety Board (NTSB) will conduct an inspection.

The sheriff said her office would like to thank the Wirt family, David Sparks, Dave Kiley, Northwind Helicopters, members of the Willamette National Forest, and the National Transportation Safety Board for their assistance.

A documentary video covering the process and celebrating the life of Wayne Wirt is planned to be released later on the HeavyDSparks YouTube channel.