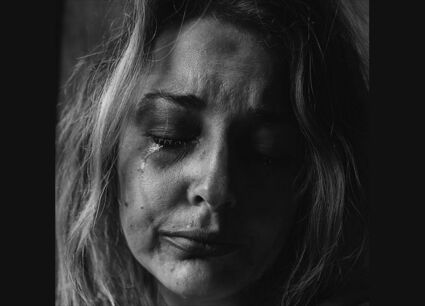 My mother-in-law is a hysterical, manipulative, two-faced woman who thinks she is the center of the universe. Her three children adore her and won't confront her even when she is wrong.

My mother-in-law tops any story people relate with one of her own. She makes vague promises, then doesn't follow up. Not getting her way, she throws a crying fit so everyone feels sorry for her. My problem is she wants to displace me as the mother of my child.

At my baby's first birthday party she had him in her lap, and when I came to take him away, she shoved me off. I walked away for a few minutes not to offend her. When my son began to cry, I took him to give him some juice. Not 30 seconds passed before she tried to snatch him from my lap. When I told her to wait, she cried hysterically, and her daughter drove her home.

Her family gave me nasty looks as if I disrespected her and made me feel unwelcome at my own party! She always has to get her own way. Her behavior is creating animosity between me and other family members. My husband doesn't want to interfere because he says she has always been like that, and they have always given in to her.

My husband says I should be the mature person and let her act that way, but I'm 26 and she's in her 50s. I've tried to confront her in the past only to have her throw more hysterical fits. Help!

Kayla, your mother-in-law is not stupid, she is very clever. She knows she could never pull this kind of behavior on a job, in a store, or with other people. But she has latched onto a technique that works for her family.

Misbehavior is given into, and only becomes worse. Your husband is right in saying you need to be the mature one, but he is wrong about what that means. The mature parent doesn't let a child misbehave, even though it is easier to turn a blind eye. The mature adult knows misbehavior must be corrected.

Not making a scene when a scene is called for doesn't express good manners. It is foolishness. The only way to confront a drama queen is with more drama. If you can't do it for yourself, do it for your son. There is no reason he should be brought up in a world ruled by a crazymaker.

Being big, while allowing another to act small, only leads to being surrounded by small people. How different this world will be when good people learn to stand up for themselves.

I have trouble trusting my girlfriend of two years. She's lied to me the entire time about her smoking habit. I finally caught her a while ago. I agreed to help her quit, but she never speaks about it.

This makes me paranoid because I don't know what else she could be lying about. I think she is still smoking and lying to me even though she said she wants to quit.

Tad, smoking is so addictive a person must wholeheartedly want to quit. When they are smoking, they can recite all the reasons to quit. Take away their cigarettes, and they can't think of a single one. Smokers cannot be forced, cajoled, or cornered into quitting if they do not want to.

When Tamara and I first got together, she smoked and I didn't. Out of my feeling for her, I bought an air filtration unit to make it possible for her to smoke around me. Out of her feeling for me, and with no prompting of any kind from me, she quit smoking.

When it's right, things get worked through without becoming an issue. You can't get past this issue and look at what it has caused.