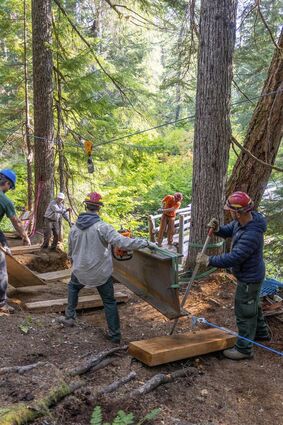 From September 6th to October 19th, workers combined wood and steel to more than double the projected lifespan of the Fish Lake Creek Bridge.

CLEAR LAKE: A bridge at the north end of Clear Lake was reconstructed this year with an eye to the future. One ton I-beams were used in the process, replacing log stringers and sills that were still intact and useable - but showing their age.

The rebuild, over the Fish Lake Creek, on the McKenzie River Ranger District, was a training opportunity, enlisting more people than normally necessary for similar work. About 25 people helped on the bridge. Those collaborative efforts included the Santiam River Zone Trail Crew, the U.S. Forest Service - Umpqua National Forest Tiller Ranger District Recreation Crew, and volunteers from the Scorpions Trail Crew. The reconstruction was partially funded by the Great American Outdoors Act.

The log stringer and sills of the old bridge were intact and useable but reaching the end of their life. In addition, the log railing was also starting to rot and fail. 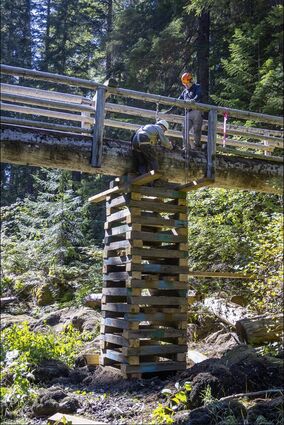 Since there was no road access to the bridge, workers hauled the I-beams 8/10's of a mile to the bridge site using a motorized wheelbarrow and a customized trailer. Additionally, connecting and setting the beams in place required skyline cables and innovative solutions.

"Combining wood and steel and switching from log to concrete abutments and steel I-beam stringers more than doubled the projected lifespan of the bridge," according to Dylan McCoy, Lead Wilderness Ranger for the McKenzie River Ranger District. "Much of the wood used was for aesthetic reasons, not structural, and it will require replacement before the lifespan of the bridge is reached."

During the summer months, lots of work is accomplished on the Willamette National Forest in addition to firefighting efforts. More details on some of the work completed this summer will be highlighted in future issues.