Design is now in the conceptual stage 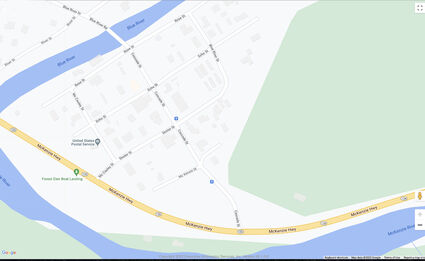 Wider travel lanes, along with sidewalks or curbing, could be coming to Blue River's main street.

BLUE RIVER: Lane County Public Works is developing a design concept for the portion of Blue River Drive between where it crosses Blue River and the McKenzie Highway. Planners say the immediate need for the project is to provide better direction for people who are redeveloping in the area and where to start measuring building setbacks from Blue River Drive.

Currently, there is a 60-foot right-of-way along the roadway; however, Lane County code requires 90 feet. "As you can imagine, that 30-foot discrepancy creates too much uncertainty, especially in such a physically constrained area," according to senior planner Becky Taylor.

Taylor says the county will be soliciting public input about preferences on the various roadway elements such as parking (one side, both sides, or none) and sidewalks (next to the road separated by a curb or setback from the road with a planter strip).

"Ultimately, we'd like the design concept to reflect community preferences and be formally endorsed by the Board of County Commissioners," she said. "Creating a solid vision for Blue River Drive would not only provide greater clarity about development expectations but increase confidence and competitiveness in securing grant funding needed to implement the vision and construct the roadway improvements."

A meeting for the afternoon of Saturday, January 14th, is tentatively between 1 and 4 p.m.at the McKenzie Community School to discuss the project with the community and solicit public input and preferences

That will be followed by a mid-February Public Hearing before the Lane County Planning Commission on Tuesday, February 7th, at 7 p.m. People can attend at Lane County Public Works, 3050 N. Delta Hwy. in Eugene; or via a hybrid option (online and/or phone).

More discussions are planned for Wednesday, March 22nd, at 5:45 p.m. before the Lane County Transportation Advisory Committee, also at Lane County Public Works, 3050 N. Delta Hwy; or via online and/or phone. That could be followed by a mid-April Public Hearing before the Board of County Commissioners at Harris Hall in Eugene.