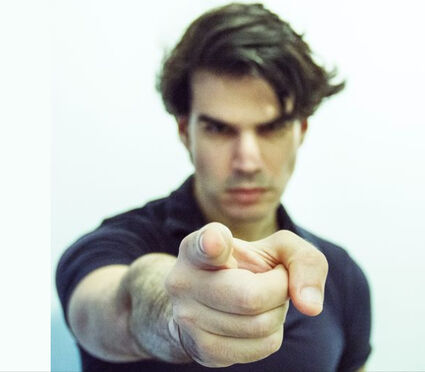 I have been in a relationship for two years. Early on, my boyfriend became angry about picking up the tab, even though I offered many times and he turned me down. We worked through that and I try to be aware of equality.

Recently we were driving to a party for a coworker. I also consider her a friend. My boyfriend drove, as he always turns down my invitation to drive. En route to the party, he glanced down at me programming my phone, and we heard a big bump. The car had hit something.

We could not determine what it was and thought perhaps he had scraped a mailbox close to the road. Later, we realized that a deer hit the car. Two days later, he was parked and someone backed into the other side of his car.

He took the car in and his insurance company is making him pay the deductible. My dilemma is that he thinks I should pay half because we were going to my friend's party. I am appalled. What do you think?

Cammie, when most people read "A Christmas Carol," they identify with someone who feels the joy of the season, like Bob Cratchit. Your boyfriend identifies with Ebenezer Scrooge.

Dickens' tale, the Ghost of Christmas Past shows Scrooge how he lost his chance for love. Scrooge sees the woman who once promised herself to him saying, "Another idol has replaced me...a golden one." Your boyfriend's miserly approach to love may lead him to the same fate.

Driving carries a responsibility that cannot be assigned to another, and with a second accident, chances are your boyfriend would still be out the deductible. The measure of love is generosity, and yet there is a paradox. In a successful relationship, each party should feel they receive more than they give.

Put To The Sword

My girlfriend has an aggressive sense of humor. She teases and likes to parry put-downs. She says it is all fun, and it is very important that she can joke with her partner. She thinks I am thin-skinned and overly sensitive.

Indeed, I know I am sensitive, but this is a vicious circle which makes me more and more sensitive. No doubt this kind of dialogue is very common among some people. I witness it almost daily with friends or certain colleagues.

To me, there are limits, and obviously, my limits are different than hers. I'm working on being less sensitive, but the only way to do that is to numb myself, which doesn't give her the participation she wants. She says she will try to do it less, but it always comes back.

I do not think she believes there is a problem on her side. She's said she wants this in a relationship, and if I can't handle it, maybe we aren't right for each other. Other parts of our relationship are great, but I don't understand why clearly negative behavior is so important, especially for an intelligent person.

Albert, your girlfriend is good at swordplay, but she can't fence by herself. She wants you to play so she can feel good about herself. She has a fondness for something hurtful. That says more about her character than you realize.

There is a difference between humor and wit. Humor puts us in the same boat as the other person, while it throws us out of the boat and into the water with the sharks. That is why humorists are often loved, while wits are often quoted but seldom loved.

Your girlfriend is a wit. She is not too thick-skinned to realize she hurts others. Most likely, she simply doesn't care. Making you wince is part of her nature. Look for a girlfriend who wants to row the boat with you, not feed you to the fish.