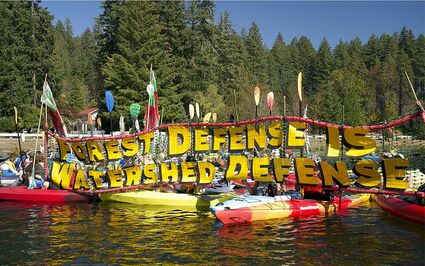 The Pacific Northwest Regional Forester has withdrawn a January 2021 Record of Decision that authorized the Flat Country Project near McKenzie Bridge. Officials say they will review aspects of the project including the conservation of mature and old-growth forests and carbon stewardship. The action means will not go forward at this time.

The action came after Regional Forester Glenn Casamassa formed an interdisciplinary review team to review the Willamette National Forest’s Flat Country project's final Environmental Impact Statement analysis and decision. That team was comprised of six members from the Pacific Northwest Region and the Pacific Northwest Research Station. The team formed on Aug. 1, 2022, and completed their review and report on Sept. 27, 2022.

The Flat Country timber sale was to include about 5,000 acres about 8 miles east of McKenzie Bridge.

At an October protest in Leaburg, Oregon Wild organizer Victoria Wingell criticized the Flat Country sale for aiming “to cut down some of Oregon’s last remaining, biggest and oldest trees— precisely the ones we need to keep growing and storing carbon.” She said, “forests like these are already the best wildlife habitat, the best climate mitigation, and the most resilient against wildfire.”

At that time, Tammy Terrell Robinson, Public Affairs Officer for the Willamette National Forest noted that an internal review was underway. “We will use the review to ensure that our proposed actions are in alignment with the most salient science and shifts in environmental conditions.,” she said.