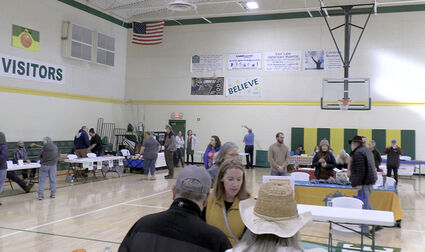 The public had a chance to interact with over 30 local organizations, agencies and businesses last Saturday inside the gym on the McKenzie River Community School campus.

FINN ROCK: Outlines for developing recovery plans were key to many conversations as people circulated around the McKenzie High School gymnasium this weekend. Set up around the room were representatives from a wide array of organizations - from Lane County's planning staff to the student-led McKenzie Rebuilds group or the fire districts to the Clearwater Partners.

"I like to compare the efforts back in the 70s to what you are all doing today, in the McKenzie Valley," said Cliff Richardson in his kickoff to the event. "You're the McKenzie Boosters now - the ones that are helping revitalize, rebuild, and restore the community up here that we love so much."

Some of those discussions revolved around ideas that would "promote compact, small-town development patterns, according to Laura Buhl, a land use and transportation planner with the Oregon Dept. of Land Conservation and Development. Because the Blue River area is not an incorporated municipality, Buhl said it presents challenges to establishing a mixed-use area downtown or other higher-density developments. However, she said, the existence of the McKenzie River Community School helps make the case that the state should look at the area as having similarities to an incorporated community.

Looking at the ground level and below is the focus of studies now underway to develop a community wastewater system. That project is being financed by a legislative appropriation designed to aid wildfire-impacted communities. Over at the Blue River Water District's table, Rob Woodard, Lane County's special projects district manager, told people that over the next six weeks, soil studies and percolation tests will determine where the town's drain fields will go. A decision on whether that will be the Blue River Park site or the Three Sisters Meadows property is expected within six months he said. Construction could be expected during the summer of 2023, Woodard added.

Becky Taylor, the county's senior transportation planner, says he had conversations timelines about timelines too. "People along Blue River Drive have a lot of uncertainty about where to start measuring their building setbacks or how much room is required for the street, the right of way, and utilities," she said.

Currently, there is a 60-foot right-of-way along Blue River Drive. The Lane County land use code, however, requires 90 feet. "That generated a lot of fear and concern for property owners that not only did they have to set back for a really wide right of way, to begin with, but by some arbitrary goal that went even further," she said.

"The most pressing thing for me is to get approval for a 60-foot setback to allow people to get permits in February without design specifics." 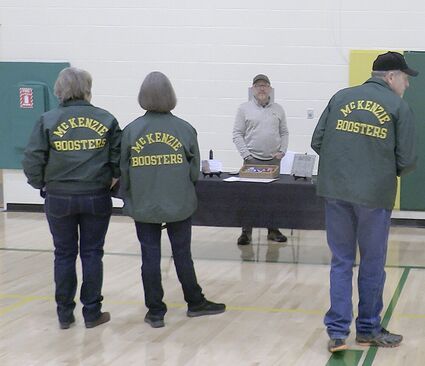 Mary Ellen Wheeler, Connie & Cliff Richardson made a visual connection to the past by donning McKenzie Boosters jackets worn by their parents.

Taylor said she feels very confident the county's planning commission will approve a code amendment at their February 7th hearing. With that in place, she said planners will look at other issues including head-in or parallel parking, sidewalks, locations of underground utilities, and possibly adding streetlights - along with whether or not all that could fit inside an even smaller 45-foot right of way.

"Today provided a whole host of opportunities for people who are looking at recovery," said Matt McRae, the county's disaster recovery manager. "There are a number of challenges that are unique to wildfire recovery in this area specifically because it's unincorporated," he said. While opportunities are different from those that are open to municipalities, McRae said he felt there were opportunities "where we can find flexibility, alternatives, and solutions that will work and support recovery in rural communities up and down the whole valley."