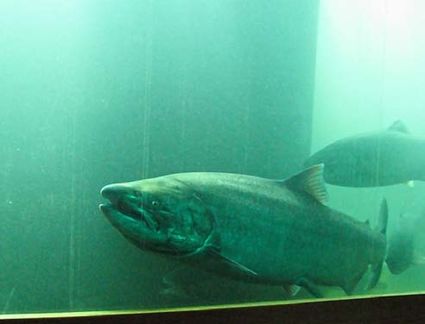 The governors of Oregon and other Northwest states have signed an agreement to work on recovery of salmon and steelhead.

Idaho Gov. Brad Little's workgroup to consider what to do about dwindling salmon numbers has wrapped up, as conservation groups in neighboring states say it's time for a regional approach.

Brett VandenHeuvel, executive director of Columbia Riverkeeper, said the warming climate is making it difficult for salmon and steelhead to navigate the Columbia and Snake Rivers.

He maintained the fish are in a dire situation, and this issue can't be solved by a single state.

"Any solution that's going to work needs to be a regional solution," VandenHeuvel contended. "And I think that's why there's so much effort going in among the states and the federal government, and tribal nations and interested people who rely on salmon, who care about salmon, to come up with solutions."

In October, the governors of Idaho, Montana, Oregon and Washington signed an agreement to work together on recovery of salmon and steelhead in the region.

VandenHeuvel added restoring salmon populations also is crucial for orcas in the Northwest.

The Idaho Salmon Workgroup was convened in April 2019.

Brian Brooks, executive director of the Idaho Wildlife Federation and a member of the group, said the most crucial recommendation - removing four dams on the lower Snake River in Washington - was taken off the table early in the process.

He calls the other proposals that will be in the group's final report "low-hanging fruit."

"The recommendations we did come up with, they will move the needle, they will help fish," Brooks acknowledged. "Unfortunately, they will not get us to those levels of abundance that Idahoans want."

VandenHeuvel sees that as the best solution for restoring salmon and steelhead populations, but he knows it's also the most divisive proposition, with farmers concerned about how it would affect their industry.

"We think that a broad congressional, legislative solution is really needed here," VandenHeuvel urged. "Something that's going to look hard at the transportation issues and the irrigation issues, and make sure that those are addressed."