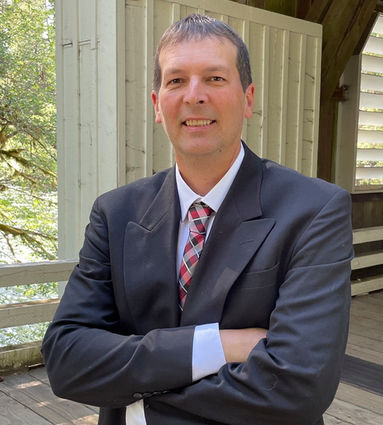 RAINBOW: "Being born and raised here I've seen a lot of things in the last year and a half that I can't just sit back and watch without stepping up and trying to carve a new path." Those words, Darin Harbick says, are key to his decision to announce plans to become the next governor of Oregon.

Some things that triggered his decision include restrictions imposed for dealing with the COVID-19 pandemic. "I just feel we're losing more and more of our freedoms," Harbick feels. "There are mandates and laws that are not a choice anymore. I think we're getting away from having choices. It's not people making these decisions - it's top down leadership."

And, it's at the top where he sees the need for change. "The governor has made all the choices right now to shut down businesses, to allow lawlessness to happen in Portland and Eugene. A lot of those businesses won't be coming back," he feels.

For qualifications Harbick points to his past 14 years on the McKenzie School Board, 15 on the McKenzie Chamber of Commerce board and another three with Travel Lane County. He's also operated five businesses, coached a girls' high school basketball team to a state championship, and a women's basketball at a private college in Eugene.

While some people might ask if a governor candidate should first have prior county or state level leadership experience, Harbick discounts that approach. "My reason for running is that I'm not a politician. A lot of those positions are very political and require law and rules. I think I'm more of a leader and a coach. The governor needs to be that."

Harbick points to his business background, combined with coaching his team to a state championship as strong points. "I look at it as being more of a leader. Senators, lawmakers and politicians are people who do what their job is. I don't feel that's my expertise."

With over 53 percent of land federally owned in Oregon, some issues ranging from possible hydro dam breaching to timber harvest levels are likely to continue to be contentious. Harbick admits up to now he hasn't been involved with those sort of issues, and has focused, "On helping the community - like fire victims and moving logs and trees so people can rebuild their homes. I will have an awesome team to get the pros and cons of issues, and then as a group we'll make the decisions. I want the peoples' voice heard."

He announced his decision on Facebook last week, but official campaigning can't get off the ground until filings are made with Oregon's Secretary of State on September 7th. Selling his Takoda's Restaurant to his daughter and son-in-law, "frees up time for me to take on this pursuit," Harbick said.

Getting started at this early date wasn't something he'd anticipated. "I was called to do this on a higher level and I'm answering the call," Harbick says. "I'm going to go for it."

Over the next year he plans to tour the state and meet with entrepreneurs, educators, and mental health leaders.

"I love this state but it's going in a direction right now that I can't just sit back," Harbick said. "I'm the type of person that if I see something I think I can fix then I'm going to go for it and throw my hat in the ring with everything I've got. When I do that I usually succeed. I've got a track record at that."