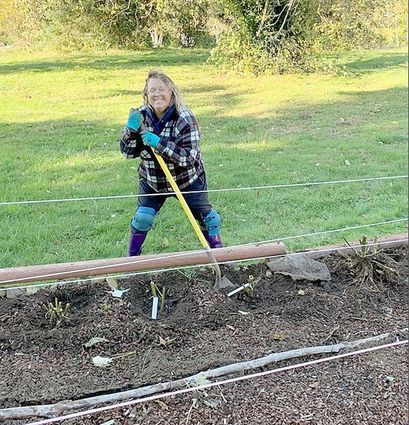 Dahlias are addictive, at least for Julie Huynh Moore, an Oregon State University Master Gardener, who plans to grow 2,000 by the end of May.

That's quite an accomplishment for anyone, but considerably more for Moore, who lost her home and all 1,200 of her dahlias in the Labor Day wildfires. When she was allowed to return after nine days, the ground was empty. Not one of the fully blooming dahlias were left. Surprisingly, after a couple of weeks, sprouts starting showing, but when she dug them up, the tubers were too small to produce quality dahlias so they all came out.

But she's not discouraged. Moore's mother, who lives at the beach and is also an avid dahlia grower, was holding 350 of Moore's dahlias, which she's replanting at her property in Lincoln County.

Moore's love affair with dahlias started seven years ago, when she and her mother decided to move on from their obsession with roses to a new passion for dahlias.

"We used to grow roses, but my mom doesn't have a place for them anymore," Moore said. "We needed a new hobby. Dahlias are a way to spend time together. My mom and I would drive more than two hours to Portland the second Tuesday of every month to go to the Portland Dahlia Society meetings. We'd play with dahlias and have a great time."

Now, Moore is a judge at dahlia shows and has won multiple awards, including a coveted trophy she lost in the fire. Some of her mementos were kindly restored by Larry Smith, a fellow dahlia fan in the society.

There are many reasons to love dahlias. Intricate swirls of petals arrange themselves in so many designs it takes 29 categories to classify. Those are further divvied up into six sizes and 15 colors. Pompoms, collarettes, mignons, waterlilies: The names are as colorful as the blooms they describe.

"There is every size, every shape, almost every color," Moore said. "If you don't like a specific color, there are so many others. They can stay in a vase for quite a while, they're easy to grow and they brighten up everyone's life. When I'm looking at soil and seeing green coming up, I get excited."

Some of Moore's favorites include 'Ketchup and Mustard,' a 9-inch formal decorative in red and yellow; 'Holly Hill Golden Boy,' a miniature that's less than 4 inches in diameter formed in a ball that's bright yellow; 'Pam Howden,' a 5-inch waterlily that's a light blend of orange and yellow; 'Iris Blackheart,' a 4-inch bi-color in striking dark red and white; and 'Vernon's Obsidian,' an orchid type that's almost black.

* Amend the soil with organic matter such as compost or well-rotted steer or chicken manure or add it to the planting hole. One of the best things to do is feed the soil.

* Get a soil test to know what nutrients your soil may be missing. Dahlias like a pH of about 6.

* Plant after all chance of frost is over and soil has warmed; through June 1, depending on where you live, or when you plant tomatoes in your area.

* Site in full sun in soil that drains well with eye facing up. Plant 6 inches deep and 2 to 3 feet apart depending on the size of the plant. Cover with only 2 or 3 inches of soil and fill in the hole as the plant starts to emerge.

* Place a strong stake next to each hole when you plant. The stake should be on the end of the tuber where the eye is emerging so the plant can be tied up in intervals as it grows. Waiting until the plant is growing can damage the tuber and/or the roots.

* Fertilize when plants start coming up with steer manure or a fertilizer with a balanced fertilizer like a 10-10-10 or 16-16-16. After initial fertilization, drop to a lower nitrogen fertilizer (the first number on the label is lower) or even use foliar fertilizer or fish and seaweed fertilizer. Feed again a month after planting and again another month after that. By mid-August stop using fertilizer.

* Water after planting and then only when the rains stop. Once plants are up keep soil evenly moist but never soggy or the tubers may rot. Check moisture by sticking your finger into the soil up to the second knuckle.

* Snip off dead flowers to keep plant blooming. Disbud if you like long stems with just one bloom to put in a vase. Take the two baby buds off at the juncture of the main bud.

* Slugs love young dahlias. Bait or set out traps two weeks after planting and continue throughout the season. Earwigs can also be a problem. To help control them, keep debris away from the flower bed and don't let the soil get too wet. Some slug baits also are labelled for use on earwigs. Moore uses iron phosphate bait at the beginning of the season and iron phosphate slug baits with Spinosad insecticide when the earwigs come out later.

* Dahlias will bloom until first frost and then turn brown and die back. At that point, you have the choice of leaving the dahlia tubers in the ground or digging them up. If they remain in the ground, cut back to 2 inches, cover with 4- to 6-millimeter black plastic and cover with mulch. They are more susceptible to dying from too much moisture rather than cold, so, again, well-drained soil is essential. Some people will leave the hollow stalks and hold it in place with a rubber band to keep the tubers from rotting.

Alternatively, once a hard freeze has turned the plants brown, cut back stalks to about 6 inches and dig up tubers. Wash them and let dry for 24 hours in the garage on a tarp or newspaper; don't let them sit on concrete since it wicks away moisture. By now, one tuber will have grown into a clump of them. Divide by removing new tubers from main stem. Keep those with an eye and store in crates or cardboard boxes with newspaper lining the bottom. Layer tubers in vermiculite.

For more information, refer to the Extension pamphlet Dahlia Culture or attend the Portland Dahlia Society show the last weekend in August at the dance pavilion at Oaks Amusement Park in Portland. There's also a society Facebook page that gives more information and experts answer questions.