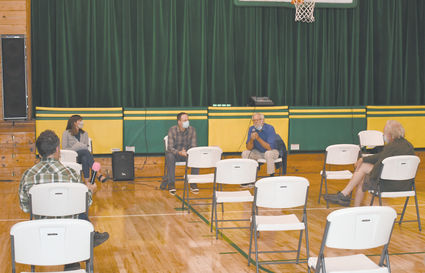 People continued to have questions about rebuilding their home for Lane County officials like Amber Bell, left, Keir Miller, and Steve McGuire, right.

FINN ROCK: Lane County officials came with good news but had to field a number of complaints when they spoke at a public meeting last Wednesday.

On the good news front was the passage of Oregon Senate Bill 405, according to the county's planning director, Amber Bell. Sponsored by senators Prozanski and Girod, the bill applies to property owners who want to replace a "non-conforming" structure that had been destroyed in a wildfire. "What it means is if the structure was built lawfully but at some point in time there was a setback or land use the structure didn't meet," she said. "The state has extended that timeframe in which you would need to rebuild to September of 2025."

Also on its way to confirmation was House Bill 2289, Bell said. That law would expand the ways people can replace non-residential structures that were also destroyed and opens up opportunities to repair or replace subsurface sew-age disposal systems.

Back on the local level, officials heard from people who didn't feel things were running as smoothly as they should when applying for a building permit.

Most often mentioned was the amount of time it took to get a permit and how delays in the process were inflating costs.

Some people said it would help if the county could provide a simple "laundry list" of items that needed to be included in an application package. Others said they wished there was a single person they could talk to.

Miller went on to note that, "If a permit was dropped off or mailed in, we oftentimes find they're missing items." He said there should be better communications back and forth and that normally, "a coordination person is assigned to each permit."

"We want to make sure we have the information to review," said the county's building program manager Steve McGuire. "We take a look at that before we can start an active building permit. I know there's a lot of confusion when we look at that stuff."

Offering an example of what can go wrong was pastor Doug Farrington of the Living Waters Family Fellowship, which lost its church, a home, and a guest house in the Holiday Farm Fire. Farrington said they started their permit process last November and ordered a 35ft. X 60ft. modular that is now on the site to temporarily replace the church.

To make sure things went smoothly, Farrington said they also hired a construction project manager who, "had a verbal conversation to find out exactly what the laundry list is."

Despite that, he said the county is now asking for a geotechnical and flood survey, a site master plan, and septic approval, despite saying they would use Port-A-Potties.

McGuire responded that a temporary use was normally granted for six months, not the year and a half the church was requesting. He also said when modular units are constructed, they have to adhere to occupancy classifications in the building code. The one the church ordered was for an "E" or educational use, rather than the "A" classification for a building that would be used for assembly purposes.

"Those are some of the things you're telling me that may come up as issues," McGuire said. "We try to get some of those things taken care of out front."

Miller added that the county, "Can't have the goalposts moved. If those things weren't relayed to you on the front end, that's a huge mistake that shouldn't have happened," he added.

As part of a solution, Miller said the county is hiring a new "permit navigator" who will be stationed upriver several days a week. In addition, the Public Work's Eugene office has reopened as well, with afternoon hours set aside for upriver residents who schedule an appointment.