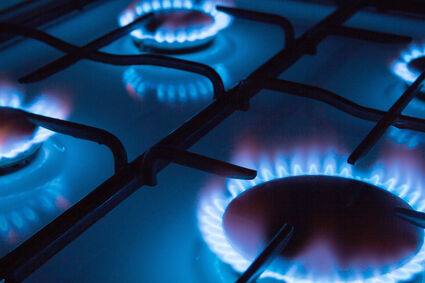 Research has found one hour of cooking can produce nitrous oxide levels that would be illegal if found outside.

Wildfire season has obvious effects on air quality outside, but hidden impacts on air quality also are lurking inside some homes. Environmental and health groups - as well as the Oregon Health Authority - are warning about burning natural gas inside, such as from gas stoves.

"That can cause anything from headaches, nausea, fatigue," said Pang-South. "There's this new study from Power Past Fracked Gas that children in homes with gas stoves have a 42% increase of asthma."

Pang-South had used an air quality monitor to measure carbon dioxide levels while cooking on a gas stove and found concentrations reaching unhealthy levels after 20 minutes of cooking.

One way to reduce levels of hazardous gases is opening windows. But that can be impossible during Oregon's increasingly severe wildfire seasons.

Vivek Shandas is a professor of urban studies and planning at Portland State University. He said he's concerned about folks who have to work outside or take public transportation in these conditions.

Shandas said he wants to improve the health of the state's most vulnerable community members.

"Who are seeing the brunt of not only the wildfire consuming their homes and their belongings," said Shandas, "we're also seeing those whose homes and belongings aren't consumed by the wildfires inhaling a lot of the really degraded air."

Barbara Gottlieb is environment and health program director at Physicians for Social Responsibility, which is also raising the alarm about the effects from gas appliances. She said one solution is building out electrification.

"What it aims to do is to rethink our buildings, our structures," said Gottlieb. "So that they're not being built with either gas furnaces or gas water heaters or gas stoves, but from the start they are electric."

Gottlieb added that this cuts down on indoor air pollution and that the source of energy for electric appliances increasingly is from clean sources like solar and wind.