Deer Creek is on the mend 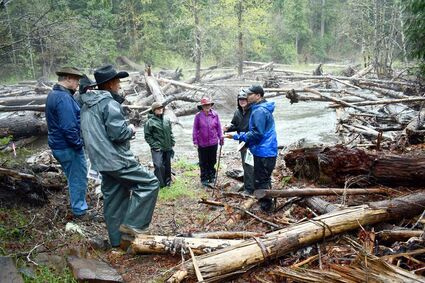 Last Thursday as about 2 inches of rain fell, Jared Weybright, Executive Director of the McKenzie Watershed Council, and Kate Meyer, a Fisheries Biologist with the USFS explained how the addition of logs and berms have helped the Deer Creek drainage change from a fast-moving channel to what now looks more like the way the area appeared and functioned in historic times.

MCKENZIE BRIDGE: Deer Creek could be seen as an example of building back better by moving toward the past. The large McKenzie River tributary is one of three upriver areas where the effects of human activities are being counterbalanced by human interventions that mimic nature

Over several decades, logging in the Deer Creek drainage, combined with severe flooding in 1964, scoured out the floodplain, clearing all vegetation. Following the flood, and for years to come, officials say the U.S. Forest Service salvaged most of the trees and logs that remained along the stream.

Other human interactions included creating berms that straightened the channel and caused the majority of the remaining wood, gravel, and fine sediments to be flushed out into the mainstream river. What was left behind was a fairly deep, narrow channel. Often times people heading east during heavy rains would see muddy waters in the McKenzie until they passed by where Deer Creek tributary flowed in.

Those were among the messages delivered during a tour of rehabilitated riparian areas last week. On view were the results of several projects that have been underway since 2016 to counteract impacts to habitats for native species, -including threatened Spring Chinook Salmon and Bull Trout.

During a 2016 project, 200 trees were broken in half and placed in Deer Creek. In addition, 10,000 cubic yards of material was pushed into the mainstem channel to raise the streambed. In the years since all those numbers have greatly increased.

The Water & Electric Board's re-licensing for the Carmen-Smith hydro project was also beneficial. Power transmission lines were moved from along the creek channel to a slope above Deer Creek Road.

While that work was underway, over 1,000 large trees along the 17-acre transmission line corridor were added to restoration work areas.

The results have been encouraging. Back in 2017, spring Chinook salmon were seen spawning in Deer Creek, for the first time since 1993. In addition, fisheries biologist Kate Meyer says several salmon carcasses have been found in log jams and are providing rich marine-derived nutrients to the freshwater ecosystem. A snorkel survey in the summer also documented juvenile bull trout have been using Deer Creek.

This year, partners including the McKenzie Watershed Council, U.S. Forest Service, and the Eugene Water & Electric Board plan to restore the lower 1/4 mile down to the confluence with the McKenzie River. Realignment of the McKenzie River Trail and relocating a pedestrian bridge are in the planning stages soon.