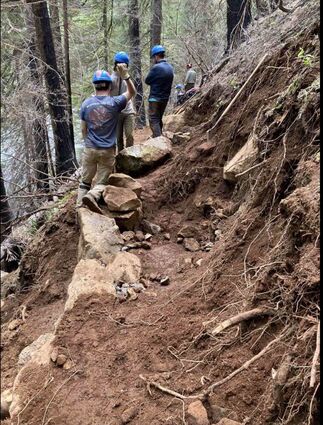 MCKENZIE BRIDGE: Last Tuesday volunteers from the Scorpions were busy restoring areas hit by 2021's Knoll fire on the McKenzie River Trail - between Deer Creek and the Trailbridge Reservoir. They joined a McKenzie River Ranger District crew about 2 miles downstream from the dam that was repairing fire-damaged sections of the trail.

The work included restoring the tread on sections that were damaged by slides, trees, rock falls, etc. Last Tuesday they focused on a section with a very steep side slope - building rock retaining walls. With rock bars, pick mattocks, sledges, rock slings, and other tools the Scorpions dug large boulders out of the hillside and slowly coaxed them to their new home to form a solid base for the tread. 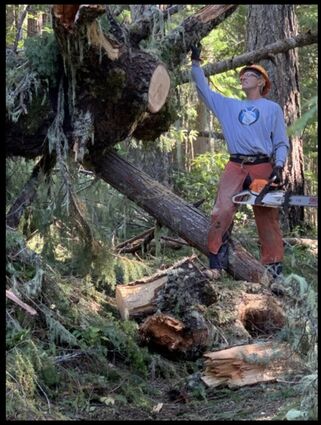 Workers say, "We also were able to brush up on our penitentiary skills by busting up large rocks to make golf ball-sized cobble to fill in the voids between the large boulders. After a full day's work, we got about 30 more feet of trail recovered."

On Thursday, May 26th, the Scorpions had a great and successful day on Separation Lake Trail #3536. Volunteers Tom Brauner, Tom Boyd, Steve Deppert, Andy Hamilton, Sig, Mike Smith, and Garrett tackled the long trail all the way down to the bottom of the canyon at the bridge creek crossing. Skills like great crosscut sawing and some good brushing in places made the trail look good again.

The Scorpions say the trail is now logged and clear from the trailhead down to the bridge (5.6 miles). Future work will include the section that climbs up from the bridge past Separation Lake and ends at the junction with Horse Creek Trail #3514.