Thanks to the state grant, the Upper McKenzie Rural Fire District has added four temporary seasonal firefighters who will fill out the ranks during 2022.

To boost capacity within the Oregon fire service, the Oregon Office of State Fire Marshal (OSFM) has awarded $6 million in grants to Oregon's structural fire service agencies to hire fire fighting staff during the 2022 wildfire season.

The Upper McKenzie Rural Fire Protection District received a staffing grant to hire temporary seasonal firefighters. "This is specifically for response to our community and will increase our ability to keep small fires small," according to UMRFSD Chief Rainbow Plews.

"The selection process has happened and I am happy to introduce our summer crew," Plews added in naming Jess Boykin, Jose Ramirez-Solano, Vinny Tafoya, Luke Callahan, and Lemont Southworth. "We are fine-tuning the schedule as most are working around other jobs and personal summer plans. They will all be working part-time," Plews says. "We are super excited to have extra capacity to respond to summer incidents. Thank you, OSFM."

With the additional funding, McKenzie Fire & Rescue has hired two seasonal firefighters and a spokesman said the district, "Will use remaining funds to bring on additional personnel during extreme fire danger." 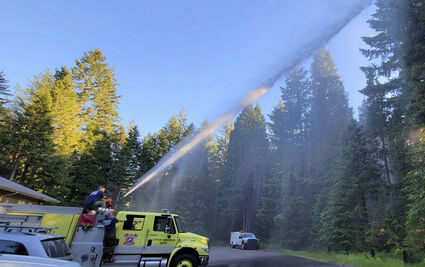 Crews are training for the 2022 fire season.

"Our office has heard from multiple fire chiefs across Oregon who say this funding will have a profound, positive impact in communities across the state," Oregon State Fire Marshal Mariana Ruiz-Temple said. "Agencies will be able to have additional paid firefighters at the ready during these critical summer months. This will help to keep fires small and away from communities."

Besides bolstering capacity within the Oregon fire service and the Oregon Fire Mutual Aid System. The goal of Response Ready Oregon is to attack fires while they are small and keep them away from communities. Officials say the grant awards will also help to mobilize the Oregon fire service to incidents like wildfire and floods while helping protect Oregonians, their homes, and critical infrastructure.