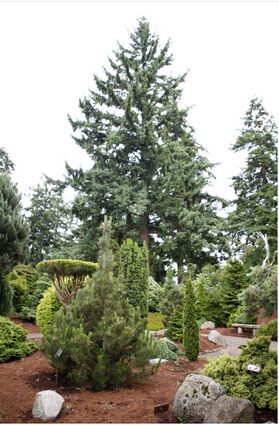 Watching trees turn bewitching shades of orange, red and yellow is part of the magic of autumn, but seeing the needles on conifers fade to yellow and fall to the ground can be unnerving.

"The difference is that with deciduous trees they do it all at once in a shorter time span," he said. "Evergreen conifers shed needles from summer through fall. And those that fall are only a fraction of the total needles."

Depending on the species, it can take anywhere from two to seven years for a conifer to lose and grow all its needles.

"When you look at a conifer, yes, it's technically evergreen because it's always green," Ries said. "But you're not looking at the same needles all the time. They shed the oldest needles every year. People think they're not in good health. But in reality, they're just going through the normal cycle."

The outermost needles are the newest, so those dropping are in the interior and less likely to be noticed. If other areas of the tree are turning yellow, then it's time to get advice from your local Extension office or a certified arborist. In the past two years, large numbers of Oregonians have watched some of their conifers – largely Douglas-firs – turn brown and sometimes die. That damage, Ries said, is the result of drought and also a problem that should be referred to experts.

A few conifers do lose all their needles in one year, namely western larch (Larix occidentalis), dawn redwood (Metasequoia glyptostroboides) and bald cypress (Taxodium distichum). So if you see one of these trees without needles in winter, no need to worry.

If all this talk about conifers is making you feel like adding one to your landscape, fall is a fine time to plant one. Fall and winter rains will keep the tree watered and give it a good start. But before you take a trip to the nursery and plunk down your money, Ries said to do some homework first and choose the right tree for the right place.

"One call I often get is from people worrying about trees too close to the foundation of their house," he said. "The rule of thumb is if you have a small tree like a vine maple or Japanese maple, it's OK close to the house. A large-growing tree like oak should be at least 20 feet from the foundation."

Get help choosing a tree, with Extension's free app designed for iOS and Android tablets called Selecting, Planting and Caring for a New Tree, co-authored by Ries. A downloadable publication is available for those without tablets.

Dig a hole that's two to three times the width of the tree's root ball, but only deep enough for the root ball to sit 1 to 2 inches above the ground. A wide hole will allow better root growth and is especially important in compacted soil. The hole should be the same width at the top and bottom.

Use a shovel or other tool to roughen the sides of the hole, which will allow roots to grow into the surrounding soil. Remove any roots or debris.

Be sure to remove twine from trees wrapped in burlap.

Tamp down soil in the bottom of the hole. Place the tree in the hole, making sure it sits above ground by at least 2 inches to allow for settling. The biggest mistake people make, Ries noted, is to plant a tree too deep.

Fill in the hole with the soil you dug from it. Although you don't need to, you can add a soil amendment. Don't use more than a ratio of one-third soil amendment to two-thirds native soil. It's not necessary to add fertilizer until the tree is established, about a year after planting.

Mulch around the tree, keeping mulch away from the top of the root ball.

Most trees don't need to be staked because young trees left to stand alone develop stronger trunks. But an especially weak tree or one planted in a windy area will need to be staked for the first six months to a year. Use two stakes and straps or hose. Don't use wire, which will cut through the bark. Always remember to remove the stakes and ties.