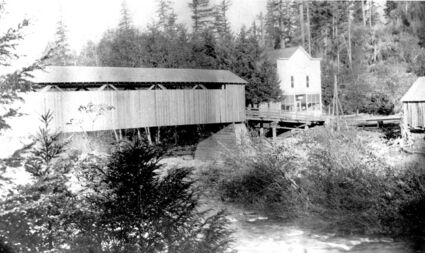 So much of the time we go busily about our everyday life with no thought of how our area got to be the way it is now. I find that most people really take interest in and enjoy the area much more once they learn something about the history behind it. As we go gliding up the McKenzie Highway, how many of us ever give any thought to what this route was like or what traveling it was like, say 100 years ago!

I'll not dwell on the road-highway at this time but would like to rap some about the various river crossings encountered some seventy to ninety years ago along this great McKenzie River that we call homeland.

It seems that Jacob C. Spores settled along the McKenzie River near what is now Coburg, arriving there on September 5, 1847. He may have started the first public crossing when he used a canoe to transport foot traffic across the river in the vicinity of Armitage Bridge in 1848. In 1850 he built a ferry to transport travelers and their vehicles and livestock across the river. A couple of his neighbors proceeded to do likewise and attempted to run Mr. Spores out of business. A legal battle arose and all three were instructed to appear before the authorities. On the appointed day the river was running extremely high. Spores appeared but the other two men failed to show up. Mr. Spores was given full right to continue in the ferry business, which he did until a covered bridge was built at the site by now known as Spores Crossing, in 1878. The bridge was 239 feet long. and cost $9,080 to build. In 1881 another 102 feet of approach was added. This bridge served until it was replaced in 1928 by a steel bridge 343 feet long, at a cost of $56,276.93.

About three or four miles upstream we find Deadman Ferry operated for a good many years. A couple of miles further up the river were the two Seavey ranches on the north bank where large fields of hops were grown. Their only access for many years were their ferries. Even the hop-picking crews were brought in on the ferry it was in use until sometime in the late 40s. Their departure came out onto Hayden Bridge Road in the vicinity of the present Page School.

On up river, Madison (Matt) Spores, son of Jacob C. Spores, operated a ferry at "the Narrows," now known as Hayden Bridge. It was replaced by a covered bridge also. This bridge was built in 1874, the same year that the first bridge was built across the Willamette River at Springfield.

The same man was given the contract for building both bridges and had both of them under construction at the same time. I am told that a large barge-like structure was brought in and suspended in the middle of "the Narrows" to put the temporary falsework up on to hold the bridge span until the truss work was completed and could stand alone. The river runs very deep through "the Narrows," measured at 69 feet of water. Therefore it would be near impossible to stand the falsework on the river bottom as was the usual method.

The Hayden Bridge was a 217-foot span with short approaches on either end. A steel bridge was built on the upstream side of the covered bridge in 1926. It was replaced by the present concrete bridge about 1968 or 1979. An interesting note here: This last bridge was built alongside its permanent location, the other bridge was removed, and then the new bridge was slid over into place.

It was reported that the first ferry crossing between Cedar Flats and Walterville was near the curve at the east end of Cedar Flats Main Street. Due to the widening and growing shallowness of the channel through the years, the ferry crossing had to be moved to where the water was deep enough to allow the ferry to operate.

Caswell Hendricks built and operated a ferry at what is now Hendricks Wayside Park. I have not learned when this ferry was put into operation but am told it was there as of 1877. Mr. Hendricks had a homestead on the south bank of the McKenzie River and had built his house in the vicinity of McKenzie Hwy. and Deerhorn Road. He operated the ferry for many, many years, possibly up until 1897. The fee was 50 cents for years then went up to $1.00.

Mr. Herbert C. Thompson wrote for the "Old Oregon" in the October 1923 issue about his first trip into the mountains in 1891. He recalled the following as they left "The struggling cross-road village of Springfield or Slab Town as it is nick-named due to its sawmill. But as we proceeded the mountains steadily narrowed down on us until we entered groves of maples and other native woods, anticipating the timberline. My journal records that we lunched near Hendricks Ferry. I recall distinctly the scene: A little green Jummock for our table with a spread of alders. Mr. Brown, a sturdy old Englishman with a gray chin beard streaked with tobacco juice and a gruff manner that belied his kindly heart, slung off his saddle and lay the streaming horse blanket for our tablecloth. Mr. Young, a bearded, hearty farmer with the gentlest voice and manner in the world, noticed my twitching nose and came to my rescue. 'Don't you think Mr. Brown that the blanket is just a leetle strong?' he asked in a conciliatory and tactful tone. Mr. Brown grunted and slung the blanket aside, whereupon we placed our cold snack on clean, fresh newspapers.

There was a certain show of formality observed by these old pioneers in their relations to each other. They did not slap each other on the back like the primitive Westerners of the movies and they always "Mistered" each other." (End quote)

Sol Dotson lived on the north bank. His house sat about where the driveway comes into the Hendricks Wayside now. Mr. Dotson is reported to have run the Hendricks ferry from about 1897 until about 1904. At that time Grant Hendricks, son of Caswell Hendricks, returned from eastern Oregon and took over operating the ferry until it was replaced by a covered bridge, which was completed in 1908.

Somewhere during the years of the Hendricks ferry, the following mishap took place. A Mr. Elwood Bowerman had a homestead on the hill almost due north-northwest of the present bridge. He was returning from Eugene/Springfield one evening and requested to be put across the river at the Hendricks ferry. The river was up and running very high with lots of drift logs and debris. After much persuasion and against his better judgment, the ferryman finally set out to put Mr. Bowerman across on the ferry. Having reached about mid-stream, a log floating by struck the ferry, breaking the cable and setting all drifting downstream. The men decided that the horses would have a better chance of survival if they were set free. They unhitched and unharnessed the horses and backed them off the ferry into the water so they might swim out to shore. One horse managed to do this but the other was caught in the current and swept below the ferry. The ferry then drifted into a logjam, crushing the horse by the impact. The horse was not killed and men from the area gathered and helped get it out onto the high ground. The horse's injuries were bad enough that it would never be able to work again. The county bought Mr. Bowerman a new team to replace the injured horse. This happened about three miles downriver from the crossing or about in the back of the present Greens Gravel Plant off of Camp Creek Road.

At one time the water was very low in the river and a steam engine tractor attempted to "ford" the river at the Hendricks ferry crossing. However, the water was deep enough to get into the firebox and drown out the fire. Due to a miscalculation on this and not having enough head of steam in the boiler the engine lost power and stopped near mid-stream. A crowd gathered to watch the proceedings. A team of horses was summoned, a line ran to the disabled steam engine and it was pulled to shallower water where the firebox was above the water line. Dry wood was kindled and soon a head of steam was built up and the engine was underway again on its own power.

The covered bridge was built a hundred yards or so upstream from the ferry crossing. The south end rested on the huge boulder that L.L. and Pat Ray have built their round house on a few years ago. The bridge was of two spans: 240 feet and 180 feet with 142 feet of approach on the north end and 20 feet of approach on the south end Thus it reached from Deerhorn Road to over halfway across the picnic grounds of the Hendricks Wayside. It had the distinction, I'm told, of being the longest wooden bridge in the nation at the time it was built. Just think of all the timbers, planks, and other lumber it would take to build that 582-plus foot of bridge and it was all done for a total cost of $13,100.00. 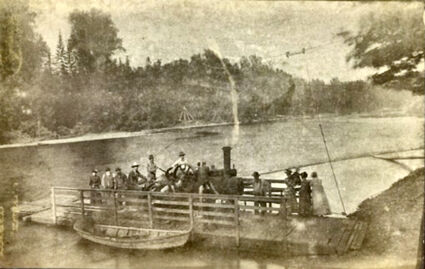 In the spring of 1895, the county commissioners purchased the ferry boat and fixtures for $80. It continued as a free service until it was replaced by the bridge.

Stubs of piling from the center piers can still be seen near the north shore. Sticking up out of a pile of big rocks. Not many years after the bridge was built, the river started washing around the base of this pier and threatened to undermine the pilings that the middle of the bridge sat on. John Vaughn and several other men from the Walterville area, along with David Stephens and some of his sons, and Andy Stephens and sons came to the rescue. With teams and wagons they hauled big rocks from the cliff on the hill west of the Walterville Power House, over to the bridge, the flooring planks were removed and rocks rolled off the wagons and down and also around the pilings that were being undermined.

At another time shortly after the bridge was built, the hill on the south bank had been logged off and the slash was being burnt. A burning log rolled down the hill and came to rest at the end of the bridge. Someone was quickly summoned with a team and the log was drug away before it could set the bridge afire, which it was very much in danger of doing.

The covered bridge was also marred by a tragedy in later years. Charlie Deadmond, an honorable young man who had grown up in the Walterville area and was very well-liked, picked this spot to commit suicide. The entire community was shocked and very saddened when the news of this tragedy was received.