Legislators hear from victims and locals pitch in over the weekendCRT 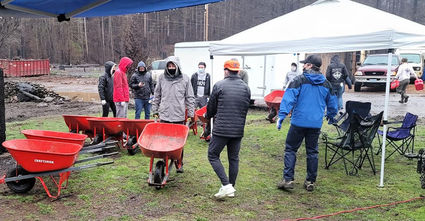 SALEM: “We’re here to get a to do list from you and learn how to make you whole,” was the way District 21 State Representative Brian Clem opened Monday night’s virtual meeting of the Oregon House Special Committee on Wildlife Recovery. “We want to hear how you’re doing - unfiltered - from the ground,” he added.

The response came in both verbal and written input from people affected by the Beachie Creek, Lionshead, Holiday Farm and Archie Creek Fires that destroyed large tracts of the state this year.

Recovery costs, ranging from getting rid of debris and dead trees to rebuilding, were on the mind of Tish Hathaway of Vida.

She went on to write that, “It seems particularity unjust in the area of timber, where so much of the timber is being provided by this area, and yet those planning to rebuild will not recoup any benefit in purchasing lumber at now extremely inflated costs.”

As a solution, Hathaway sug-

gested a rebate for people rebuilding in fire areas so they could buy lumber at pre-fire costs.

ceived input from the other affected areas, including Detroit, Oregon, where many said they were still without running water. Several who lived there were also critical of the low level of public assistance they’d received, often targeting criticisms at the Federal Emergency Management Agency.

Both FEMA and the Small Business Administration were of concern to Debi Heller and her husband. The couple had purchased their land in the 51000 block for their retirement but have been fighting FEMA, the SBA and the Red Cross since September 26 of last year over loan denials.

“Now we have no shop, no RV, no woodshed, no electricity, no water, no anything. It is a total disaster.,” according to Heller.

“Who exactly is responsible for this big mess we find ourselves in?” she asked. “Does it really matter? The people who have suffered losses from this disaster deserve help from our government. I have paid my taxes on time my whole adult life and never asked for a thing,” she added.

Nearby, Geri Betz reported she’s been busy dealing with bureaucracies as well when trying to replace two manufactured homes that were victims to the Holiday Farm Fire. She has been trying to obtain building permits to replace the dwellings since shortly after the fire.

One home was located within the mapped Floodway of the McKenzie River and was allowed in 1996 because surveying showed it was located above the 100 year flood elevation. Lane County at that time agreed. Now, however, she’s being required to go through a $2,756 Floodway Development Permit process and hire a surveyor to reconfirm that the site is above the 100 year floodplain elevation.

As if that wasn’t enough, Betz soon after to get a $3,946 Earthquake Liquefaction technical report that luckily showed it wasn’t a concern for her property.

In addition, both sites require application for a sewage system inspection at a cost of over $900 each.

“I am not faulting Lane County for these problems,” Betz wrote. “I believe that their hands are tied and that they are unable to do much to expedite the replacement of dwellings under current local, State and Federal rules and regulations. It is essential that the Oregon Legislature adopt regulations that reduce the complications involved in the replacement of our homes and send a message to the Counties and City that they are to be positive and proactive in the help of the victims of the wildfire to allow replacement of their dwellings.”

During her testimony, East Lane County Commissioner Heather Buch reminded legislators the recovery process could go on for years. She also pointed out that the McKenzie area’s communities are all unincorporated, with many elderly homeowners and many lots that were “non-conforming use properties.”

“Things are very different inside and outside cities,” Buch cautioned. “Our highest focus is to continue to represent people but we really need your help.”

Clem said the February 22nd committee hearing was only the first of what is expected to be several. Written comments are still being accepted until Sunday, February 28th at: House Special Committee on Wildfire Recovery, 900 Court Street NE, Room 453, Salem, OR 97301 or by email at: [email protected]