Will the Canal survive? 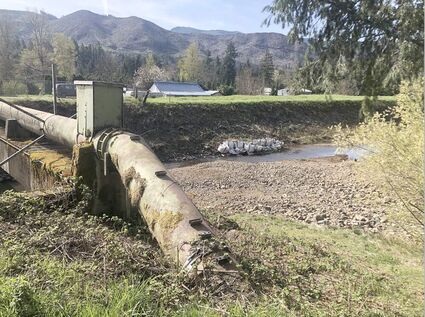 Leaks in the Leaburg Canal, like this repair at Cogswell Creek, caused the Federal Energy Regulatory Commission to order the channel be drained, causing the shutdown hydropower operations as well.

LEABURG: The Eugene Water & Electric Board is reviewing four options dealing with the Leaburg Canal - ranging from full decommissioning to complete restoration.

Officials say changes are needed on the 1920s era canal because of seepage and internal erosion of the canal levees. EWEB has not generated electricity since 2018. Today the canal barely flows as water from tributary streams is channeled to the McKenzie River.

During the entire process, safety has been EWEB's top priority, for both the community and local residents near the canal.

In studies started in 2019, the utility has developed four possible remedies it says prioritize the safety of EWEB employees and the community.

Alternative 1 calls for the full removal of all facilities to pre-project conditions – as if the Leaburg Dam, canal and powerhouse were never built. On the list of what would have to be removed include the dam, canal, and all power generating facilities. Drainage patterns that existed before the project was altered by construction of the canal would have to be reestablished. Estimates are that would include allowing from 8 to 11 streams to follow where they had in the past through existing residential or farm areas, which would involve crossing Hwy. 126. With removal of the dam, Leaburg Lake would be drained and a new bridge would have to be built to allow access to the south side of the river.

Under the second alternative, all facilities would be restored to peak performance levels.

With Alternative 3, a new power house would be built higher up the canal at Luffman Spillway. Downstream from that point, the canal would be rehabilitated to allow stormwater and tributary streamflows to reach the river. The canal work would address seepage and seismic issues, particularly on the Cogswell and Ames areas. This plan would also allow EWEB to preserve its water rights for power generation.

The last alternative would involve decommissioning the canal, and combining "stormwater conveyance" alterations to other sections of the canal with the restoration of parts of the Leaburg Project to pre-project conditions.That work would involve constructing a new spillway at Johnson Creek and modifying the Luffman spillway.

In a report to the board, electric generation manager Lisa Krentz noted that Alternatives 1 and 2 are the most expensive due to extensive construction and repairs required throughout the entire project and facilities. Those proposals represent the two ends of the spectrum.

Alternatives 3 and 4 have been identified as "middle-ground options" that the utility says would balance costs with benefits.

Plans call for the four alternatives to be discussed in greater detail during an upriver Board of Commissioners meeting, scheduled for Tuesday, April 19th at 6 p.m. at the McKenzie Fire & Rescue Training Center in Leaburg.

"While EWEB and our consultants continue to study the alternatives, we will carry on with prioritizing reducing near-term risk because safety is EWEB's first priority," Krentz said. "Those measures will include reversible canal configuration changes, such as isolating portions of the canal from the high-flow creeks, and canal-wide efforts, such as proactive removal of unhealthy trees that could fall into the canal during a storm and obstruct water flow."

On April 5th, the EWEB board approved purchasing two properties along the canal. Both are adjacent to the canal near where canal restoration or decommissioning work is planned.