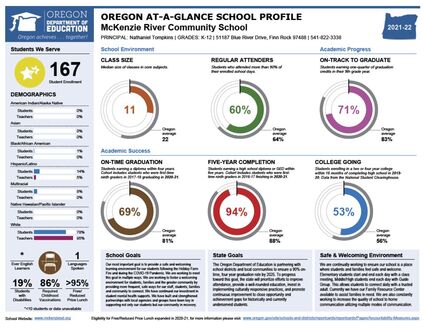 SALEM: The Oregon Department of Education (DOE) last week released its 2021-22 "At-A-Glance" report on the state's schools, which provides information about student and teacher demographics, educational readiness, and success.

The information in the report is based on the 2021 - 2022 year, which offers a comparison to pre-pandemic years, according to the DOE. Some of the data, though, could be reflected in low regular attendance numbers caused by the delta and omicron COVID surges.

Commenting on the results, ODE Director Colt Gill said, "The 2021-22 school year marked the return to in-person instruction for all students across the state, but the worldwide COVID-19 pandemic still presented challenges that required strength, resiliency, and resolve from all of Oregon's students, families and educators," He added that "Our communities and districts can use the information in this year's profiles to provide every student with the support they need to graduate."

Some of the findings statewide showed some school districts were able to add employees, but many haven't returned to pre-pandemic staffing levels. The number of counselors grew by 20% since the 2018-19 school year, and the number of educational assistants state-wide also rebounded from last year.

Locally, the McKenzie Community School District reported its 2021-22 enrollment was 167 students. Class sizes in core subjects there averaged 11, half the size of the statewide counts. Other details of the report showed that 69 percent of McKenzie's students graduate on time, down from Oregon's average completion rate of 81%. However, when looked at over a five-year period after graduation, 84% of students from the upriver school earned a high school diploma or a GED. The rest of the state fell short, with an 88% co9mpletion score.

Under school goals, the McKenzie district listed "providing a safe and welcoming environment for our students following the Holiday Farm Fire and during the COVID-19 Pandemic."

Further to the west, the Springfield Schol District's Walterville Elementary School had an enrollment of 144 for its K-5 classes. Students there matched the statewide average with 22 pupil class size.

Achievement levels in core subjects fell a bit short of the Oregon average. For English Walterville's rate of academic success was 37%, while the state average was 44%. A student meeting the state grade-level expectation of 36% for Mathematics was 10 points less; and in Science, Walterville students posted a 26% level of success, compared to the Oregon average of 31%.

Under the school goals section, the Walterville administrators said the data showed strong evidence of growth in key areas, adding that, "we remain committed to our core belief that all students can and will learn."

Within the 524 student Thurston Middle School, students were only a little bit more crowded than their contemporaries around Oregon. Class sizes at Thurston Mid were 28, compared to the state's 22-student medium size.

Core class proficiencies for English can in at 50%, bettering Oregon's average of 44%. Middle schoolers continued to outpace the state's average for Mathematics, posting 31% to Oregon's 28% but wound up with a match for Science with a score of 28%.

"We implement an aligned curriculum to ensure all students have an equal opportunity to learn," was the way administrators at Thurston Middle School explained their goals, adding that their approach includes "access to the same content, knowledge, skills, and quality of instruction." 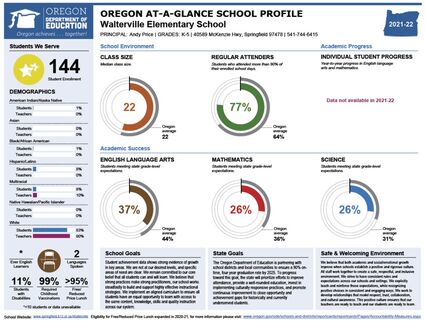 At the upper end of enrollment for local schools, Thurston High had a student body totaling 1,164 last year. It was spot-on for its rates of on-time graduation and five-year completions - hitting an 81% match with the statewide numbers for the first and 88% for the second. Thurston High graduates enrolling in a two-year or four-year college tallied at 48%, compared to the Oregon-wide rate of 45%.

The school adheres to the Springfield district's overall focus on providing a safe and welcoming environment with staff members, "working together to create a safe, respectful, and inclusive environment."

Comparisons between the McKenzie and Springfield school districts reveal that both serve a student population where 95% qualify for free or reduced-price lunches. There's a variation in compliance with required childhood vaccinations. Within the Springfield system, 99% have been vaccinated, compared with 86% at Finn Rock.

More information on Oregon's school profits and report cards is available at: tinyurl.com/mr42ycsk.