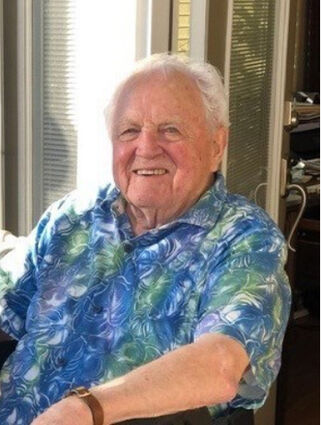 After an amazing full life, Donald Lavell Persinger passed away peacefully on December 26, 2022 just shy of his 102nd birthday.

Don was predeceased by his two older brothers, Les and Frances, his first wife Helen and their two children, Ken and Kathy.

Before he finished high school Don joined the Navy Reserve in Portland OR in 1938. He was sent to war in 1941 after the attack on Pearl Harbor, at the age of 20. He had many adventures in the South Pacific, Panama Canal, Hawaii, Iceland, Solomon Islands and Aleutian Islands. While on the ship Don was a barber, helped in the medical field and towards the end of the war in the Pacific, filmed many 16mm reels of action footage that was seen by many and used in war movies. Don received an honorable discharge in August 1945.

Don attended the University of Oregon on the GI Bill and received his Bachelor Degree in Journalism but that was not to be. He then embarked on a career in business machines and had a very successful business with wonderful and loyal employees who still kept in touch with him. Don had an airplane that some of them flew with him to make deliveries in Washington and Idaho and Oregon. Many of them enjoyed time together outside work camping, fishing, skiing and cookouts. He retired in 1986 and bought the acreage in Leaburg that year. He made several improvements and planted trees, berries and grapes.

Denta and Don met in 1991 and were married in 1993. They lived a life full of adventures traveling in the airplane or the GMC motorhome. They hunted several years in Eastern Oregon for pheasants and Idaho for elk. They spent time in Mexico, made many friends there and went beach camping on Vargas Island in BC. Lynne and Doug joined in numerous times with their kids and ours, where they caught fish, crabs, mussels, oysters and more wonderful seafood.

Eventually they bought in Venture Out in Mesa Arizona and enjoyed winters in the desert. They lived in Leaburg Oregon where their door was always open. They enjoyed entertaining and would have many come and enjoy their hospitality including lots of wiener roasts in the woods. Don was always very proud of the wine he made from all the fruit and grapes that they grew. Many stories were told over a bottle shared.

Don had several interests over the years and he enjoyed scuba diving all over the world and skiing in Europe and on Mt Bachelor and sharing his home there with friends. He loved river fishing in his river boat and took it up many of the rivers in Idaho, hunting too. He took that river boat on the ocean as well, and was skilled at getting over the bar on the Oregon rivers. Don enjoyed bee keeping and had all the gear to gather the honey. He also had a sawmill and wood chipper which both came in handy for many projects over the years. He also loved gardening and working on the farm in Leaburg where the 4 acres were a joy.

In 2018, they sold the Leaburg farm leaving good friends on the river and moved permanently to Venture Out. Don enjoyed being a member of the Silversmiths and Rock Shop and made numerous friends along the way. You could see him riding his bike around the park well into his 90's and the ladies who worked in the Activity office, fondly remember him coming in to find new movies.

Don was a storyteller like no other....having lived such an interesting life produced a great deal of stories which he always loved to share with everyone. He will be missed by all that knew him but he has left everyone with memories that will last forever.

Fond memories and expressions of sympathy may be shared at http://www.mariposagardens.com for the Persinger family.