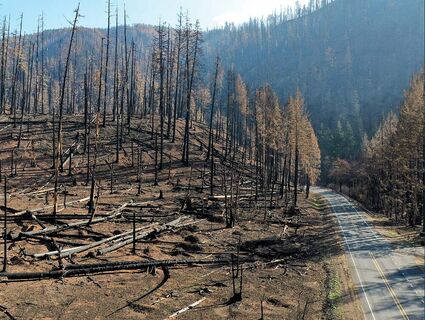 The transportation department and the contractors it hired to remove tens of thousands of damaged trees from along 120 miles of state highways in the Santiam Canyon and McKenzie River Valley after catastrophic fires in 2020 have been under fire for the past year as employees and onlookers alike reported that the state chopped more trees than necessary.

That criticism sparked a limited review of the wildfire cleanup by the Audits Division of the Secretary of State's office, which concluded that the transportation department moved quickly to clear debris left by wildfires and overall did well.

The agency, however, can improve before another disastrous fire season, auditors found.

"This report shows that in this extremely difficult crisis, ODOT was building trust," Secretary of State Shemia Fagan said during a press conference Wednesday. "ODOT learned and adapted through the cleanup, and ODOT's current efforts are clearing the way for Oregonians to rebuild their homes, their businesses and their communities."

Fagan said one of the main findings from the audit was that many of the trees removed across the burned areas were cut by groups other than the transportation department and its contractors. Utility companies sent crews out to remove damaged trees that got in the way of reconstructing power lines, and both individual and commercial landowners were free to cut trees on their property as they wished, according to the report.

Auditors said they could find no reliable figures for how many trees were cut down between September and December 2020, or who did the cutting. Between January and August of this year, the transportation department and contractors inspected nearly 94,000 trees and chopped just over 62,000. That's about 70% of the total trees that need to be removed, according to the department.

"Oregonians who were going along who thought that in general too many trees were being removed might have been noticing the additional private tree removal, which obviously ODOT doesn't have control over," Fagan said.

The review found that the department sought to do more to conserve trees than recommended by the Federal Emergency Management Agency. Under the federal guidelines, a damaged tree should be removed if it could obstruct a roadway by falling within the next five years while the state agency uses a three-year timeline to reduce the number of trees felled.

The transportation department also prefers continuing to monitor trees on the cusp of becoming safety risks rather than cutting too early, auditors reported. About 750 trees that were originally saved may need to be reassessed and potentially chopped because of additional stress from this summer's extreme heat and drought, the report said.

Auditors recommended that transportation department officials prepare for potential future wildfire cleanups at such a scale by improving internal communication and revising the training required for staff and contractors. That would ensure they understand how to protect environmental and cultural resources, such as bird nests and historical artifacts, the report said.

The transportation department also needs to improve its process for getting onto private land to remove hazardous materials, auditors wrote. Federal guidelines, which are based on recovery from hurricanes or ice storms, assume private landowners will take debris to the edge of their property for removal, but fire can turn ordinary household or yard materials into carcinogens.

Auditors also recommended that the agency find a bench of Oregon-based contractors who can be called on in future disasters. The state employed more than 160 contractors to remove debris this year, but the largest contracts went to out-of-state companies that traverse the country to clean up after natural disasters.

"The unfortunate reality that Oregon may experience another devastating wildfire event in coming years is not taken lightly," the two wrote.